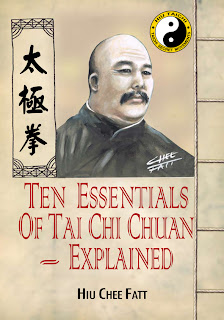 Get It Now For USD4.80 Only (please roll to the bottom for payment button or go to shopping cart tab)
Posted by Master Hiu CF at 3:09 PM

Master Hiu CF
Master Hiu started his martial art training in Tae Kwon Do when he was 17 years old and trained diligently for his 2nd Dan Black Belt. He was a state Tae Kwon Do champion and was invited to join the national Tae Kwon Do team in 1987 but he rejected the offer. In 1987, he learned Hung Gar kung fu from Master Lawrence Leong. Besides Hung Gar kung fu, Master Leong was a master of many other styles of kung fu including Tai Chi, Wing Chun and Bagua. At the age of 22, Master Hiu started learning Tai Chi Chuan from Master Yap Seong. Master Yap Seong is the inner disciple of Grandmaster Dong Zeng Chen (Grandson of Dong Ying Chieh the most inner disciple’s of Yang Cheng Fu). Besides Tai Chi Chuan, Master Hiu learned Kwok Gar kung fu, Yi Chuan and Chi Kung as well from the same master. Thereon, Master Hiu continued his study and research of Tai Chi Chuan with several other masters where he learned Chen, Wu and Cheng Man Ching’s TCC too. Master Hiu also researched deeply into Taoism and Buddhism assisting his understanding of the internal aspect of Tai Chi Chuan of which he believe could be the most important aspect of his breakthrough of the understanding of Tai Chi Chuan.

Tai Chi Chuan and Chi Kung are very precious gifts from the Chinese to mankind. It is our sincere hope that these rare gems can be spread far and wide to people all around the world. It is also our sincere hope to share with everyone the profound knowledge of Tai Chi Chuan as an internal martial art so that its real skills can be preserved and not watered down overtime.

Promote Your Page Too